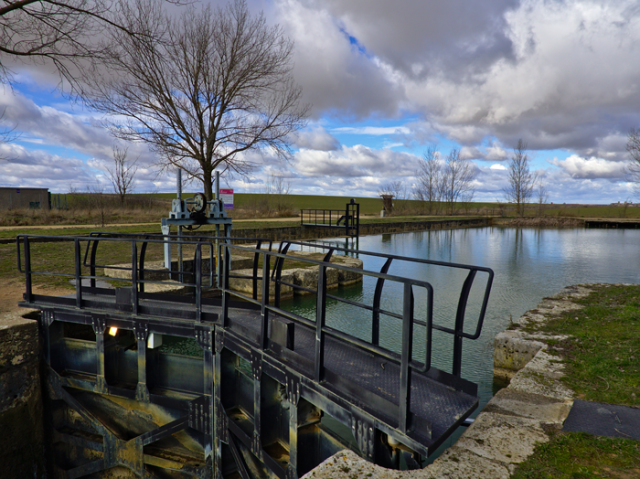 The Castilla Canal is an ambitious engineering work begun in the mid 18th century and completed one century later, the result of the imagination and the efforts of an enlightened group of people who had the idea of building an outlet to the sea for the cereals grown on the fields of Castile. Today its use as an irrigation channel is combined with its recreational function, in benefit of the visitors, day-trippers and hikers who come to enjoy all its cultural and natural attractions.

It covers a total distance of 207 kilometres. The way to follow the route is along the old towpaths which line the Canal, designed so that the beasts of burden could pull the barges along by means of ropes.Today this route can be done on foot (about eight days, walking an average of 20 to 30 km a day), by bike (about four days, at double the walking speed), and even by kayak, for which a permit is required. The best time to do the route is in spring and summer: the climate is pleasant and the natural surroundings are at their most spectacular.There are two main tourist attractions to be seen along our route. In the first place, the fauna and flora.

The Canal often runs through areas of riverbank forest, which provide a welcome coolness in summer, as do the pools and wetlands in this ecologically valuable ecosystem. It also is home to a varied fauna: birds such as the purple heron and the marsh harrier, water mammals such as the otter and water vole, reptiles and a wide variety of fish.In second place, the constructions, buildings and engineering works along the Canal form an ethnographic collection of singular interest and great variety.

A never-ending succession of docks, aqueducts, locks, irrigation tanks, milestones, workers’ dwellings, flour mills and factories, dams, bridges and storehouses.The southern stretch starts at the dock of Valladolid and ends in El Serrón (Grijota), not far from the city of Palencia. It is 54 kilometres long and has a difference in level of 54 metres, resolved by means of its 18 locks. It runs through the fertile countryside around the Pisuerga river between Valladolid and Dueñas, and the lands near the Carrión river until it reaches El Serrón, passing through the vineyards of Cigales.The junction between the other two branches is located about 2 kilometres outside El Serrón, in Calahorra de Ribas (Ribas de Campos).

The field stretch, which covers a distance of 78 kilometres, has a drop of only 22 metres and seven locks, and ends in the town of Medina de Rioseco, at the most important dock along the whole of the Castilla Canal. Beside it stands the old San Antonio flour factory, today converted into a museum.The northern stretch, which starts in Calahorra de Ribas, runs northwards to the town of Alar del Rey (where the works were inaugurated 260 years ago). This section is 74 kilometres long and with a change in level of 87 metres; it has 24 locks.

Features of interest include the dock of Alar del Rey, the quadruple lock of Frómista (where it crosses the Way of Saint James) and the Presa del Rey dam in Herrera de Pisuerga, located beside the Visitor Centre for the Canal.There are three tourist boats which make trips and excursions up and down the Canal, based in Herrera de Pisuerga, Melgar de Fernamental and Medina de Rioseco.

List price for the rooms of the Hotel and Cottages

The proximity to the Canal de Castilla, ideal for hiking and cycling. As well as to step on the Camino de Santiago. The friendly and dedicated staff. Highly recommended.

Carmen kindly. The hotel was taken with love and makes you feel at all times very comfortable. Very clean and comfortable room. Mine had a window to the attic style. Beautiful.